It was quite an honor to hear from the 6th largest brewer in the country saying "Hey...we'd love to reach the good people of Muskegon and let them know about a party we're having....can you help us spread the word?"  Ya...we sure can.  We'd LOVE to get people in on a concert the size of Founders Fest and work on that whole idea that somehow....Grand Rapids and Muskegon are so far a apart that it takes FOREVER to get there.  It's a half an hour or so....in either direction....so being neighborly is in the best interest of everyone.

Let's go back a few.  Founders Brewing got rolling in 1997.  Now, I know the craft beer thing is big, but as I recall...back in 97, it might have been the very infancy of the resurgence of smaller brewers who applied the crafts of their predecessors to bring different flavors, textures and boldness to one of America's favorite ways to quench their thirst.  Staple breweries had grown to dominate the entire beer world and the "crafters" were few and far between with the exception of imports, home brewers and a very few "flavors" in the USA.  Well, when the new keg was tapped on the craft beer market...it was a gusher.  Beer became as much of an art as a beverage and with it, an entire new approach to consumption and appreciation.  Founders was right there from day 1 in the craft beer world...and their hard work has paid off. 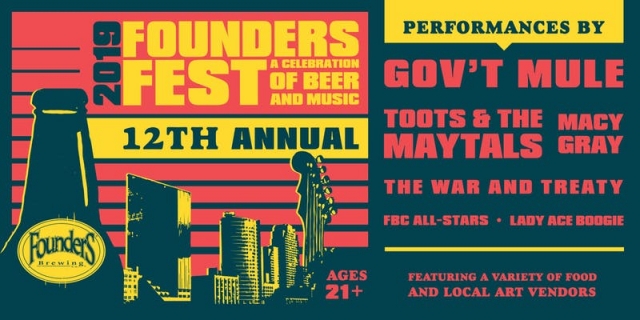 With the growth, has come re-investment.  Growth on both a local and national level and remembering to keep their roots grounded in West Michigan.  Creating jobs, a hip image, revitalizing an entire downtown neighborhood and more.  Re-investment too has meant that Founders has always kept beer as something to celebrate.  Founders hosts music events year round.  They have a state of the art tap room with concerts, food paring events, special evenings and more.

They also throw a big party from time to time and now and again... thus...Founders Fest 2019.  June 22nd is the date and it's a week long festival packed into one day!  Government Mule headlines, Macy Gray, Toots and The Maytals, The War and Treaty and more!  Food trucks...dj's to fill the gaps...cool people and a setting of a city block, covered by beer and music lovers from all over the Midwest!  A good time??  Yup.  I met up over at the Founders Taproom with Luke Sass...one of Muskegon's best exports..we talked about the festival, some history of Founders...and Luke's mom's condo.  (Huh?)  Listen in and hear more!

Fun! I have to admit...it was my first trip to Founders.  They were just gearing up for lunch and it smelled great!  If you're into the craft beer scene...and who isn't, celebrate with one of the USA's biggest innovators in the practice.  Maybe you want a diverse and awesome concert line up?  Doesn't get much better or maybe...you just want a change of scenery for a good time.  Head over to Founders Fest on June 22nd.  It's quite an honor for us at the Muskegon Channel to get a nod from such a great company to help partner in spreading the word.  Our very humble thanks to Luke, Isabelle and the Founders Team for thinking of us!!  Click on the pic below to visit Founders website!