There are several layers here....try to follow along.  There is a venue called 7 Steps Up in Spring Lake, they host Pin Drop Concerts.  The venue is owned by Gary and Michelle Hanks who also have a non profit called Courtyard Concerts which they use to help bolster needs in Grand Haven, Spring Lake, Muskegon and more.  They also handle booking music and musicians for a host of other events around the area and if that's not enough their venue is also used for event rentals for everything from weddings to political events!  They are busy people to say the very least.  They are also very community minded and they see things a little differently than the "locals"

Let me start off by saying, being part of the Sandy Corely Memorial Run for as long as I have has been one of the greatest sources of accomplishment in my career.  When I first came to Muskegon, making sure the radio station did all it could to help the cause was paramount.  The Corley family and the staff at the shop....not to mention the Fremont HOG Chapter are remarkably dedicated to their purpose and their event.  In my mind, the least we could do was get all hands on deck to aid in the battle of treatment of cancer for Muskegon and the Lakeshore area.

I first met Sandy Baker through No More Sidelines of Muskegon.  Her son Eric, or as he was known by all of his classmates "Big E", participated in No More Sidelines and he made quite a splash in his days at Reeths-Puffer Schools as the prom king, announcement reader and all around source of awesomeness.  They are avid fans of the Muskegon Lumberjacks and no matter where they go, they seem to collect amazing people to help them further what has become a truly remarkable nonprofit that is growing by leaps and bounds.  Sandy has crafted a model by which young adults can find their way to as much independence as they can handle.  Eric has Downs Syndrome, but he's really never been any different than the other kids.  And like any other kid, there comes a time that they need to spread their wings a little. 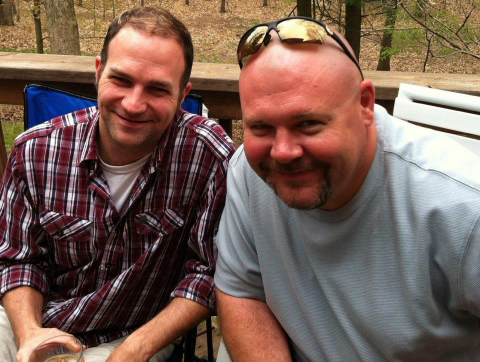 9/27- Audio, Sunlight and a discussion about ELO or the Eagles. Andy wins. Infrastructure bill? Many Saints of Newark, we discuss The Sopranos. HS sports wrap up. Lions stink. Sports Jeopardy WX
Page 3 of 3