Last year was the first year that the Mona Shores Singing Christmas Tree was ever shown live outside the live performance and we were so excited and so incredibly honored to be able to show the rest of the world this incredible spectacle that happens annually for 35 years now right here in Muskegon.  When we first had the idea, we were certain of a few things.  One, we wanted to make sure that our production of the show could live up to the tireless effort put in by everyone involved with the tree.  Two, we wanted to make sure that we lived up to the incredible beauty and splendor that happens live and, Three, we wanted to make sure everything on our end was satisfactory before we said a word that we were going to be showing the Tree live!  All of that worry and preparation left us with about 3 days to get the word out once we were sure we could pull it off. 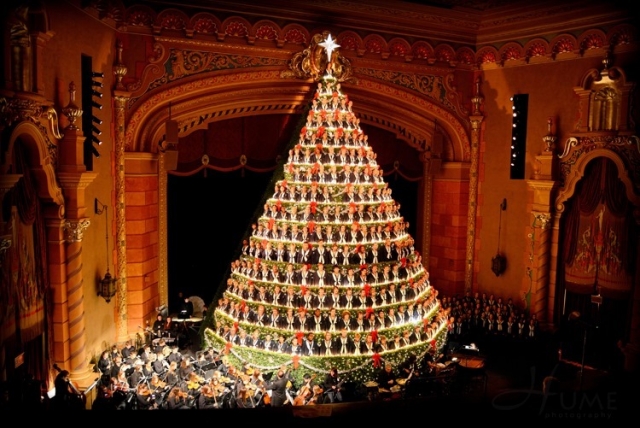 Well, the word spread quick.  In those few days, we saw what was almost unthinkable.  The word spread world wide and as the show began, the number of viewers was staggering.  We had a few sample viewers in different areas watching during the rehearsals for things like sound, and picture quality.  We also had a unique situation pop up in the fact that everyone in the production of the tree got nightly review "tapes" to see where they could make tiny improvements as the final Saturday show got closer and closer.  In our few days of spreading the word around, when the final count was done at the end of the night, 10,200 live viewers had watched from every corner of earth.  United States, Canada, Germany, India, Brazil, Japan, Australia, Guatamala, Hong Kong, Cayman Islands, Bolivia, New Zeland, Phillipenes and more.

We learned too that with the size of the audience, came a few issues.  Mostly, problems came with slower internet speeds on the receiving end.  Those with DSL or slower speeds seemed to experience some lag in the broadcast.  There were some on DSL who saw everything just fine, and an explanation was not able to be found.  It was an isolated problem we think and we're hoping this year that the frustration doesn't repeat.  We'd recommend that if you do use DSL internet, that during the time of the live show, that you limit what's taking up bandwidth in your house to help avoid the lagging.

Some other ideas.  Maybe gather some friends together to watch.  Have a watch party and spread a little holiday cheer together!  We know of one town hall outside of Berlin Germany that did that last year!  Do you have a mobile phone you can cast to a television?  We were getting word last year that people were driving around and able to watch on 4g and higher speeds with no problems.  That might help if you have a slower service at home.  Are you a Comcast Cable subscriber in the Muskegon area?  We will also simulcast the Singing Christmas Tree on Channel 96 that evening, although it will not be in high definition as Channel 96 is the PEG channel and only operates in SD.  The Singing Christmas Tree will NOT be live on the Muskegon Channel's app for Roku or Amazon Fire TV.  unfortunately, streaming life to those is not available yet.

We are thrilled to be bringing you the tree once again, and we hope you enjoy the show!!  We'll have a special screen up early on December 7th alerting the audience about the start time and how to begin to watch the stream at 7p.  In the meantime, below you'll find a very quick sample from last year to get you ready!!  Tell some friends and let's all celebrate the accomplishment of some of our young people in Muskegon this holiday season with another remarkable showing of the Mona Shores Singing Christmas Tree!