To follow up on some of the stories of ghostly happenings around the Muskegon area, Paranormal Muskegon wanted to ask some experts about it, so we contacted the West Michigan Paranormal Team to see what exactly what, if anything, is haunting Muskegon.  West Michigan Paranormal Team is comprised of Deanna Headley and Candi Hess, have done a number of paranormal investigations in the Muskegon area as well as other states over the last few years. Lovers of everything mysterious, paranormal or ghostly, these brave and personable ladies spend their weekends investigating reports of hauntings and ghostly shenanigans around the Muskegon area, from darkened cemeteries to Muskegon’s iconic historical buildings as well as private residences; all to find some ghostly apparitions or strange phenomenon.

Candi stated that the idea of becoming ghost-hunters started after she and Deanna became good friends at work. Finding that they both shared the same interest in the paranormal and ghost-hunting; and it wasn’t long before the West Michigan Paranormal Team was born. They stated have been on the ghost-hunting job for about three years now.
Deanna said a typical investigation starts by doing an interview with the home owners or person reporting the activity, followed by some historical research into the area.  Cognizant of some of the potential dangers of such activities; I asked them how they prepared themselves psychically to ward off any danger. Candi said before going into a suspected haunted building or area, they make use of crystals to focus their energy; as well as meditation and saying a prayer. In addition to being “empath's” who can sense spirits or energies; they also rely on specialized cameras and K2 meters which can detect electromagnetic frequencies to help detect the presence of a ghosts.  They also make use of what is known as a “spirit box,” which is a device that uses radio frequencies to detect electronic voice phenomena, (or EVP.  It is said that spirits manipulate energy in order to manifest and/or move objects, which means they also need some sort of energy to manifest sound; using the internal sound of the recorder to put their sound onto a tape or digital file. While they take their ghost-hunting very seriously, they still manage to have a little fun while doing it by taking  “Edgar,”  along; a stuffed bulldog, who lights up and makes a beeping noise when it sense electromagnetic frequencies.  Who says ghost-hunting has to be serious all of the time?
Using the spirit box, they state they have been able to pick up discarnate voices and other information from the spirit realm. They both said they have never had anything untoward happen to them during an investigation; but that the spirits have shown their presence by pulling their hair or touching them. Candi has actually seen a ghostly apparition at one of their investigations but seemed to feel that these antics are more mischievous than harmful. She also related that her husband often gets “picked on” when he goes along on a case.  Candi said she feels that this impish behavior is that way that the spirits try to get people to know that they are there. Often after doing their investigations, their clients will report that occasionally the activity will increase for a time; but then will stop altogether. It’s as if they are saying, “Okay they know we are here, we can go now.”  For example, there was an instance where the presence of the client’s mother was being seen in the house; but after they came in and did investigation, the manifestation stopped.
The question of whether or not there is conclusive evidence for the existence of ghosts and that the spirit survives death continues to be hotly debated by believers and skeptics alike. But belief in the spirit world and life after death has existed since the dawn of time in many cultures all over the world. This belief has not waned, even in the U.S.  A 2013 Harris poll states that over 42% of Americans believe in the existence of ghosts* and a 2015 Pew Research Survey found that over one-third believe in life after death; 18%, or one in five, of Americans stated they have seen or been in the presence of a ghost; and 29%  say they have been in touch with someone in the spirit world.** While just believing in something isn’t proof; with a high percentage of people stating they have had contact with them along with the evidence being gathered by such teams; there appears to be something to it; and that it is not just people’s imaginations. Even in our scientific and technological age; it seems that their existence is a relevant subject to ponder and study; and many people still want answers to this enigmatic question. The West Michigan Paranormal Team is helping get those answer, with dedication and thorough investigative methods, intuition, and precision equipment. Whether or not you believe there are ghosts; it seems that ghosts have no intention of going away just because some don’t believe they exist. On the contrary; they are going to hang around until someone finds them; and West Michigan Paranormal Team is on the job in Muskegon to do just that.
Our thanks to Deanna and Candi for taking the time to talk with the Paranormal Team.
Got an idea for a paranormal story? Find West Michigan Paranomal Team on Facebook or Contact Marie at This email address is being protected from spambots. You need JavaScript enabled to view it.also through her blog at https://cygnusresearch2015.blogspot.com/
Sources:
* https://www.realsimple.com/health/mind-mood/why-people-believe-in-ghosts
** https://www.pewresearch.org/fact-tank/2015/10/30/18-of-americans-say-theyve-seen-a-ghost/
PHOTOS:
1st  picture is Edgar he is our EMF bulldog

2nd picture is Warren he is our EMF teddy bear, on his photo shoot 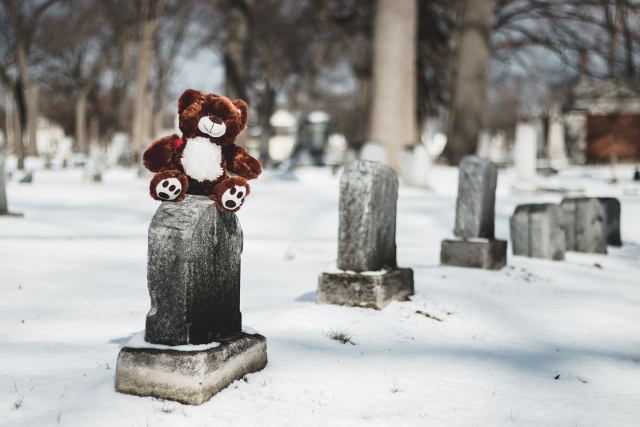 3rd is a cool picture we caught in Nunica cemetery 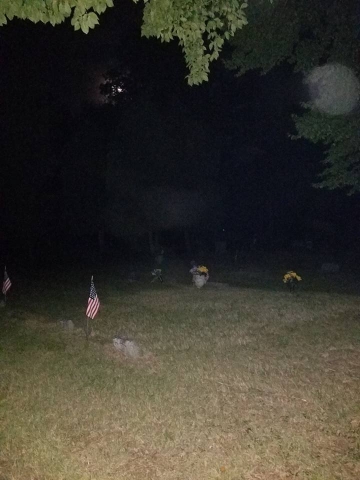 4th picture is a spirit leaning on the counter at The Only Cannoli on lakeshore caught with the SLS Kinects camera. 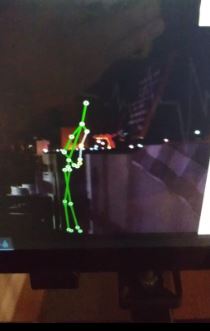