Last year, we had our eyes opened up to the world of competitive robotics when the MARS 4004 Rovers team invited us out to do a story on their team and highlight the work and effort the young people from different area schools put in to battle it out in a local, state and regional and national level to see who can build the most competitive machine piloted by the most talented team.  It's all part of STEM learning and the hands on approach for these young people is AMAZING!

Well, a story led to a live broadcast of the competition of the tournament at Orchard View last year.  We split the time with FIRST in MI Robotics with the broadcast.  We carried the competition from their end of things and they cut away during their feed and gave The Muskegon Channel the national platform during the "down time' to showcase our area teams, our area itself and highlight our young people.  It was an amazing opportunity for all to get such a huge audience locally and on the national stage.

This year, well....we all know what happened to say....EVERYTHING....the plug got pulled.   But, in advance of the show, a LOT of work went in on the part of the teams.  A lot of work went in on part of the teams, advisers sponsors and more. We did our fair share of prep in advance as well and well, we just thought we'd put our stuff in one video to show the teams how proud we are of their work and that while the event got cancelled, their hard work mattered.  We don't mind bragging up the town either.  Take a look.

We have an awful lot to be proud of with these young people.  So often, the "stars" of school are the athletes and musicians and scholars.  Rightly so.  But the kids who apply themselves to teamwork, science, mechanics and thought process....they are genuinely leading the way when it comes to the future of all of us too!  So much to be celebrated with our local young people and we just couldn't take away their screen time even though their competition was taken away by what's got us all locked down at the moment.  We'll look very much forward to 2021 with FIRST Robotics in Muskegon. 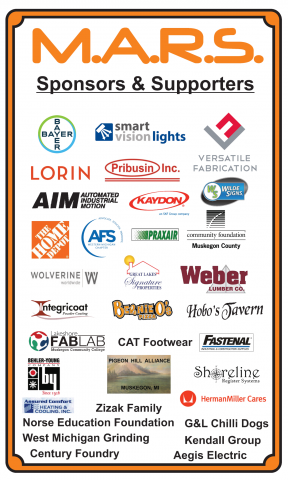