Got a little Tiger Blood running through your veins?  A lot of people do and the name Ronnie Caviness Jr aka "The Slicer" is known for his playing days in a Muskegon Heights uniform as well as his prowess on social media platforms as he inserts a lot of joy in to what he sends out to the audience while he's doing a multitude of things, especially cooking!  He's got some smooth moves that LaKisha will get out of him before it's all said and done, so ladies, stick around not only for the recipe, but some wiggling.

As Lakisha has been working all along with us and as incredible as all of her recipes are, one thing to keep in mind, these are quite often deeply rooted family secrets and the way "Grandma did it".  This is what's got Soul Filled eatery going so quickly as she's worked to get her own place off the ground and this too, is what's won LaKisha the awards she's gotten since she started off on this dream of talking all she knows and loves and bringing it back to Muskegon prepared with love and served with that idea that tradition can often out do text books, so serve it up!

Ronnie is the same.  His cooking talents are generally spent on family.  As a profession, he's a licensed barber and works in Grand Rapids, so if you need a fresh lid and find yourself over that way, you know who to look up.  As a father, newly engaged man about the house and lover of all things tasty, he grabs the kitchen when he can and shares his love of what he's been taught over the years from the generations before him....and it's not going to disappoint.  On the menu today?  Pork chops, Hot Water Corn Bread, some greens and a lot of fun...and maybe a little flirting.

Let's head into Soul Filled eatery and see what Chef LaKisha has cooking up with "The Slicer".

There ya have it!  Soul Filled, fried up with love and served just like family tradition.  This is what you'll find daily at Soul Filled Eatery in Muskegon and it's LaKisha's idea to help expose everyone to the tastes and traditions that come along with the way she does things.  Bringing along a guest or two along the way?  What better way to elevate everyone with her show?  This is a remarkable way to showcase talent, taste and some of the recipes you won't find elsewhere.  Speaking of recipes....right below you'll find them for the pork chops and hot water corn bread!  As Chef LaKisha says.... Enjoy! 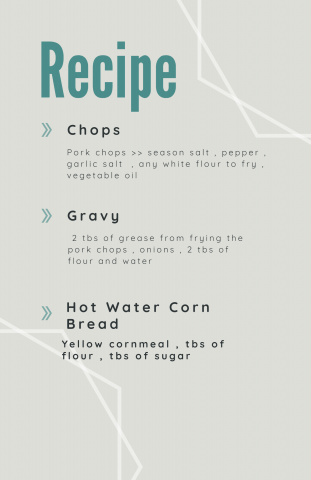