Meet Joe Lalonde of Muskegon.  Joe is a blogger and now author of a book called "Reel Leadership".  Joe had dropped me a line on Facebook about his project and I looked into it a little more to see what he was talking about and it was kind of surprising to me that we share an identical passion and I though it was pretty cool that I wasn't the only one who quite often finds hidden meaning in things.  In fact, not only am I not the only one, from talking to Joe a little today, not only am I not alone, but Joe has made a recurring blog about the theme and now, he's got a book to be published soon about finding ways that you can learn leadership from what is heard and seen in the movies.

Joe is an inspirational guy when you first meet him, there's no doubt in that.  Upbeat, positive and energetic, Joe is a steady handed IT guy by day and in his spare time, he began this blog and watched it grow.  Seems like there was another guy in town who started a blog once and it grew a little....who was that?  Anyway, in Joe's blog he discusses the "reel" inspiration behind some of the movies we all see and love and how you can take the messages within them, even the ones they try and sneak past you through clever story telling and use them to better your life situation and how your perception of the world is.  Could it be the evolution of the character in the film?  Could it be the way the story of the film twists and turns to an outcome that wasn't expected?  Joe not only goes into how some of all of this works, he actually gets with screen writers and producers to talk about how they have honed their craft to become such magnificent messengers through their craft.  Hey, if a message reaches one person, and it effects their life positively, it's a great thing.  All the glitz glamor and money that Hollywood has to offer is awesome, but that connection and how to make it to a larger audience is really where the magic happens.

Really a fun conversation with a pretty good guy.  Take a listen to Joe talking about "Reel Leadership" on the Muskegon Channel.

Hey, Joe might be the next guy to go "big time" out of Muskegon and his book is going to inspire a lot of people to want to take a look. It's in pre order stages right now and as we work our way toward the holidays in a few months, think about this for a gift for an aspiring leader or even a movie geek!  There's a take a way for everyone in this book and you'll want to say "you knew him when" when he's high a top the New York Times Best Seller List.  You can find links to Joe's blog and where to pre-order the book if you click on the image below. 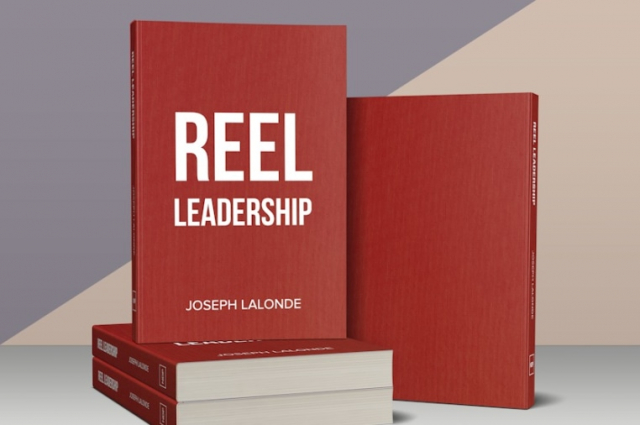