One of our fundamental values at the Muskegon Channel is to watch people grow.  It's inside of all of our work as a team as well as those we have come across here in town who've had a dream and wanted to go a little further with it.  If they are an author, a performer, a photographer or creator, seeing the progression of their careers has been incredible and when they make a jump, and think to include us as part of the next big step, it's an honor of the highest degree.  This is the case with Ricarlo Winston who we met a few years ago at the Back Alley Comedy Club.

Ricarlo was working as the manager of the club as well as refining his comedy career.  He spent a LOT of time doing the work in comedy no one sees.  You know, the "glory" stuff like making sure the tables were set, the floors vacuumed, bar stocked, tickets sold and the marquee changed.  Yes, even comedy has it's ugly side.  He also used the gig to help him work on material, grab an emcee or opener slot and headline sometimes too.  This is what they technically refer to as "The Grind".  In comedy, The Grind is hard, comes with a lot of personal sacrifice and those few minutes on stage while momentary euphoria, are fleeting and when they are over, you are immediately back to thinking about what was right, what was wrong and what can be better the next time.  Keep in mind, you may only get 7-10 minutes to figure all that out.  Well, The Grind has led to the moment that can set the stage for the future of a Stand Up....Ricarlo is there!

Set to tape his first feature length special at the Park Theater in Holland on April 28th at 8p, Ricarlo is ready for the big time and with a feature like this and a management team behind him who is plugged into the comedy scene on a national level as well, the goal is to get the years of training and prep to pay off in an hour or so of top shelf comedy that will be seen and heard on a much wider scale and with any good blessings, the rest falls into place.  Here's an added bonus.  Ricarlo is not the only comic on the bill and he's also not the only one taping for their hopeful future success.  Brianna Blackburn will be doing her full length show as well and cameras will be rolling for Bri too.  As a fan or comedy, or a reason to just say "I was there" this is a can't miss.  Worried about the tickets?  Stop.  Tickets are $5 to ensure a house as full as it can be and a great, and enthusiastic audience.

Ricarlo and I popped into the "secret lair" of comedy at his day job and had a little talk about what it's taken to get to this point, and where he hopes to see it go.  Have a listen.

We're so excited for Ricarlo and to have shared his story over the years while he's hones his act, developed Fresh Ghost Comedy with Tim Locke and began to bring laughter and joy to places like Coopersville, Newaygo and still keep it going here in Muskegon speaks volumes of dedication to the craft and with fingers crossed, to see the next "big thing" come out of Muskegon and that being someone who spreads laughter and joy....we're all in. Click below and get yourself some tickets to see the taping and support our home boy Ricarlo as he continues to climb that comedy ladder. 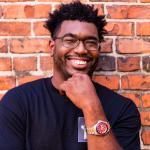