The idea that Western Avenue is more than another street is really, really digging in.  The reality is, as we've evolved the Downtown Muskegon footprint, subtly and surely, Western Avenue is becoming more and more of a pedestrian destination than it is a traffic necessity.  Now, before you go getting in a panic or anything, let's just say that their are no road closures or diets planned, however....the side walks are getting a little wider, the stops are much easier to enjoy while strolling along and with the addition of residential as well as some commercial, retail and dining in the area, the walkable community is becoming a reality.

With the growth, the added social district and the need to draw people down to see that haps....well, Muskegon is tripling the efforts this year on entertaining the masses as well as giving local performers a chance to hone their crafts on the street.  The Muskegon Street Performers Series will be happening June 15th, July 21st and August 18th.  All times from 6-8p.  It will be along the end of Western down by the Farmers Market and wrap up by Trinity Health Arena.  There will be 40 performers on hand with anything from marionettes to juggling, human statues and reading.  Maybe a juggler is your thing?  How about a puppet show?  I'd like to offer a thought to you from a quote in a documentary.  The film is a PBS American Experience Film called "The Circus" and one of the speakers calls the circus, "Our season of imaginative play" and another calls it "The beauty of what humans could be".  Now, sure....street performers are not exactly the circus, but their arts, from juggling to clowning music to acrobatics....these are the treasures that spark imagination and inspire kids.

Best part of all of this is that it's not going to cost you anything to enjoy the community out and about.  All performances are free as you march.  You'll find plenty of own cases and tip jars.  Do keep in mind, they are performers and an open guitar case in front of them is a great way to say thank you, as well as teach your kids about giving a little.  Let them drop a couple bucks in toward the cause, it will make them feel like big shots.  The opening night of the series, June 15th...the Farmers Market is holding a food truck rally, so come hungry for that...and all up and down Western, the sites and sounds and smells...are delectable.  Support local!

Rachel Dody has been at the Street Performers gig for 6 years now....let's catch up with her on a nice and relaxing day at the Muskegon Farmers Market, she's got the 4-1-1 in the 231.

Get up and get out!  Find yourself complaining about the price of everything?  Good news!  The Downtown Muskegon Street Performers is all of our favorite four letter word's.  FREE!  Won't cost you a dime to see humans being their ultimate self.  One thing about street performers, they do what they love.  Sure, there's an ounce of a side hustle, but that's not all bad either.  It all kicks off June 15th and it's a wonderful use of Downtown!  We'll plan on seeing you there. 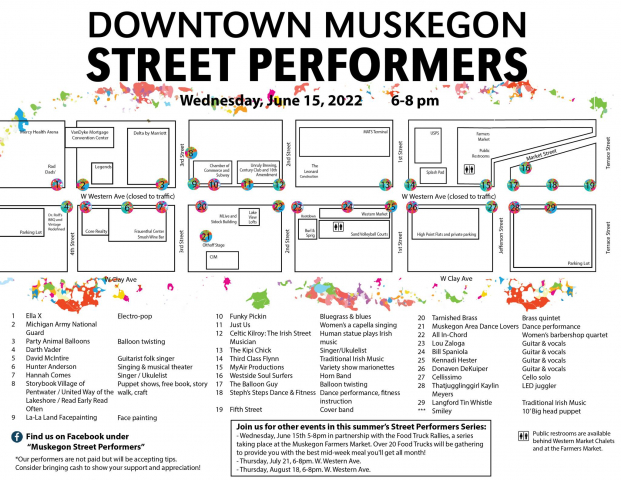