Is a great honor to have Chef Char on the Muskegon Channel.  You've seen her on WZZM 13 for a few years sharing her love for great food, great times and her willingness to share..second to none.  She's got a pretty big role here in town at Kitchen 242 as well, she host classes on just about anything.  Kids cooking and healthy snacks to some more exotic dishes and best use of locally grown food that you can find week in and week out at the Muskegon Farmers Market.

This time around, it's all about the rhubarb!  I grew up with rhubarb, I still am hard pressed to find a better pie than a rhubarb pie...and trust me when I tell you...I am ALWAYS on the hunt for better pie.  Today, Chef Char shows us how to make a pies equally delectable cousin rhubarb crisp!  You'll find the complete recipe below, but for now... let's watch the master work he magic from Kitchen 242 in Muskegon.

Voila!  (If you don't know French...that's wah-lah).  The rhubarb crisp is ready and boy, is it delicious!  Here's the complete recipe from Chef Char.  Give it a try for yourself, or if you think you could use a little more time and attention as you learn to make some of the yummy stuff...check out the list of classes offered at Kitchen 242.  You'll find them in the link just below the recipe!  Many thanks to Chef Char for the eats, and to Kitchen 242 to give us the space to tape!  Here's the recipe -

Since rhubarb is considered a vegetable, this is one of my favorite vegetable desserts outside of carrot cake and zucchini bread!

2 cups old fashioned oats (do not use instant oatmeal)

In a medium mixing bowl, add sugar, flour, salt, egg and vanilla and mix until all ingredients are dissolved.

Mix in cut up rhubarb and stir until all pieces are coated with filling mixture.

Prepare a 9X13 baking dish by coating with nonstick spray or butter, then add diced rhubarb and filling mixture and distribute evenly in pan.  Place about 2 cups of crisp crust ingredients over top of rhubarb and filling mixture (any remaining crust mix can be placed in a sealable plastic bag, frozen, and used within 6 months).  Place in preheated oven and bake for 45 minutes. 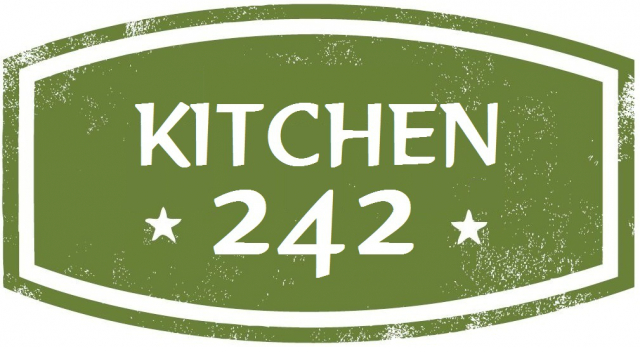