So, it's cold out.  Time to turn the oven on and add some warmth and some delicious smells to the house with all the favorite baked goods everyone loves!   There's a thought today too, that people should be using more natural ingredients in their cooking and that the chemical additives we find in a lot of store bought items might not be the best for us.  Well, Chef Char not only has the answer for that, she's got a way to help make your recipes a little tastier and add in some local flavor as well!

Did you know?  You can make your own vanilla out of locally sourced products?  It's true!  You need some vanilla beans and for our recipe today, Chef Char went straight to the 18th Amendment Spirits Company Downtown Muskegon to gather the other ingredients!  Yes...it's booze!

Find out how Chef Char makes her own vanilla for all of her finer recipes right here, on the Muskegon Channel!

This one goes a little further too.  Chef Char wants you to read this part.  There is some theory along with this recipe so please, read carefully and follow along.  She's going to make the best out of ya yet!  If you'd like to visit Chef Char online to attend one of her classes at Kitchen 242 or learn more about what she offers, click on her photo! 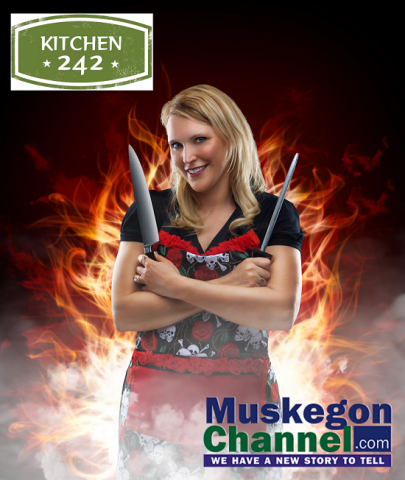 Chef Char’s Homemade Vanilla Experiment:
Starting with really good ingredients in a recipe gives a chef a better chance of producing food that looks and tastes great.  Using pure vanilla really does make a difference in the final recipe when it comes to making baked goods, sweets and snacks.  Sometimes pure vanilla can be found at the store, other times a friend can bring some good vanilla back after a trip for Mexico but all the time one can make their own pure vanilla and be sure it is the best ingredient for favorite recipes.
Why bother making vanilla if it can be found at the store?
It is all about quality. Using premium grade vanilla beans with a good alcohol for extraction will provide superior flavor and aroma than commercially produced extracts.  Look at the ingredients of any store-bought vanilla.  Pure vanilla should be alcohol and vanilla beans, nothing else.  Other things on the ingredient list, such as caramel color, corn syrup or vanillin, indicates the vanilla is not pure.  Caramel color and corn syrup are cheap for a food company and, when added to vanilla extract, helps the food company to stretch the production of their vanilla and drive the cost of the product down.  Vanillin is a synthetic vanilla extract alternative made from wood pulp and is the main ingredient in artificial vanilla flavoring, again a cheap added ingredient that is technically not vanilla.
Pure vanilla is easy to make and affordable.  Vanilla beans can be purchased at the store or online.  Buying vanilla beans in bulk typically comes with a price break when compared to buying individual beans.  Chef Char uses Madagascar vanilla beans from www.beanilla.com for best results.  The choice of alcohol can be any rum, vodka, whiskey or bourbon.  However, avoid using the cheapest brands of alcohol, as some brands can negatively alter the taste of the final product by making it bitter.
In this experiment, Chef Char wanted to see what would result from infusing premium Madagascar vanilla beans with the fine liquors produced in Muskegon.  For this culinary experiment, she obtained a bottle each of vodka, rum, whiskey and bourbon from 18th Amendment Spirits Company located at 350 W. Western Avenue in downtown Muskegon, Michigan.
Ingredients:
750 mL each of 18th Amendment’s vodka, rum, Michigan rye and bourbon whiskey
24 vanilla beans (6 beans each bottle)
Directions:
1. Slice each vanilla bean lengthwise, down the center.
2. Place sliced vanilla beans in bottles, making sure beans are completely submerged under the alcohol.
3. Place corks or caps on bottles and shake.
4. Place bottles in a cool, dry place and visit the bottles once or twice a week to shake.
5. After about 6 to 8 weeks, all of the alcohol should appear deep brown and can be used in recipes.  However, the vanilla will continue to extract past this time and the flavor will be better the longer it sets.
6. Store vanilla at room temperature and away from direct sunlight.
7. As vanilla is used and before the bottle is empty, add more sliced vanilla beans and choice of alcohol for extraction.  The old beans are preserved in the booze and still have a little flavor in them, while the new beans will boost the vanilla flavor.

Vanilla Week 6
Chef Char’s notes after 6 weeks infusing the vanilla in different types of alcohol from 18th Amendment:
So hard to pick a favorite.  I think, at only six weeks, these vanilla infusions lean heavy on the flavor of the liquor and a little light yet on the vanilla.  My favorite of the liquors is the Michigan Rye and that is my favorite vanilla of the group right now.  The bourbon vanilla is my very close second favorite but it already adds a delightful flavor kick to my caramel sauce for pies.  The vodka vanilla is very clean and distinctly “vanilla.”  I think the vodka vanilla would be great in baking recipes and some fun mixed drinks after it has had a little more time to extract.  The rum vanilla needs more time.  I can see the vanilla has darkened the contents of the bottle but all I taste right now is rum.  I have made a lot of vanilla with rum, so I know it will turn out, eventually.  I am surprised at how much slower the flavor develops in rum than in the others.
Chef Char’s notes after 6 months infusing the vanilla in different types of alcohol from 18th Amendment:
All of the vanilla extracts, regardless of the alcohol used, are now more vanilla forward and the booze notes are secondary.  I have been using the vanilla made from Michigan Rye and the vanilla made with the bourbon whiskey the most in my recipes because these two made the best extractions when comparing all the vanillas in a side-by-side taste test.  The vodka-based and the rum-based vanilla are better extracts than any store-bought vanilla but neither have the complexity and flavor found in the whiskey and bourbon.  All of the extracts from this experiment taste amazing when I use them for baking or in my homemade caramel sauce.