I love the White Lake area’s unique history. As a lifelong resident and local columnist for years, I’ve been glad to learn many fascinating stories. Our local theater, which many might know as the Howmet Playhouse, has actually had a few different names over the years, was recently renamed the Playhouse at White Lake. It was built over a hundred years ago in 1916, for local residents who wanted a place for their amateur theater group to put on plays – a fad in small towns across the country in the early 1900s. The historic structure has seen many changes since then, but fortunately remains one of our community’s main attractions. It’s a gathering place, and a cherished treasure. I was glad to be on Whitehall’s city council in 2006, when we took ownership of the theater from Blue Lake Fine Arts Camp and supported its continued role as our community venue for theater, music and other events. 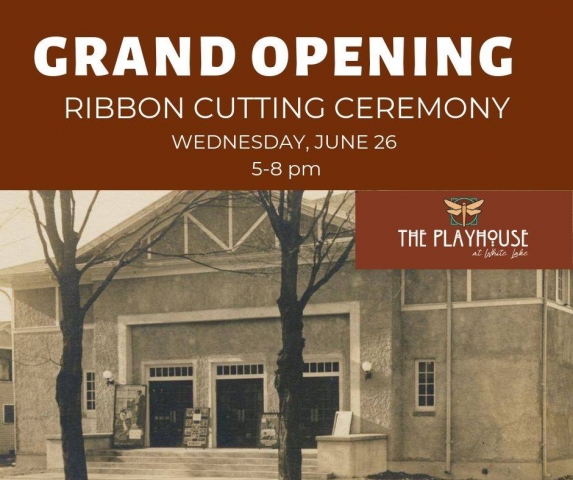 With the help of a local friends’ group and the city, funds were raised to support a nearly $4 million-dollar renovation project, which has been ongoing for the last two years. A big goal was improved handicap accessibility, as well as making sure the theater is safe for patrons and performers. The expansion is 7,000 square feet and includes a new box office and concession, larger and accessible restrooms, a 1,500 square foot lobby with glass front, rehearsal space, dressing rooms, new carpet and seats, new sound and lighting systems, stage rigging, and drapery and upgraded heating and cooling systems.

Work is scheduled to be completed this month and the “new” playhouse will be unveiled at a June 26 open house, featuring an official ribbon cutting, self-guided tours, refreshments, and music by the Oat Bran Boys. Following the open house, the season is officially underway with a June 29 performance by Max and Ruth Bloomquist, Karen and Eric Smith. Mike Snell and the FAN Club of Tommy Foster, Justin Avdek, and Scott Nesbit.

Listen to this interview of Whitehall Mayor Debi Hillebrand and playhouse manager Beth Beaman for their take – they are excited and relieved!

Click on the photo above for the link to The Playhouse at White Lake on Facebook, and their official website is linked below for more information and the full season lineup of events. The show must go on!