To The Readers and Viewers of The Muskegon Channel and Positively Muskegon.

I’d like to take a couple of minutes today to address our platforms and the thought process behind them. This is after a great deal of soul searching over the last few days where a story we published drew an overwhelming negative reaction from some and we were all quite shocked at some of the things that were said. There were those who were happy with the subject of the article too and like anything we’re not one bit surprised to see that differing sides and viewpoints come in to play over any topic. We are welcoming to those thoughts and opinions, but we do draw a line when those become targeted at fellow commenters on social media and we ask very respectfully that if you have something to say about a story we do, please do, but do be respectful and aware of what’s being said. The social media “rot” and trolling you may find on other media pages social platforms is not going to find a home with us. Debate and discord are fine, but we’ve worked too hard as a company and community to get where we are to let it erode with 5th grade name calling.

With that, we have a very specific goal and continue to follow it. “We Have a New Story to Tell”. For entirely too long, Muskegon has had a very one sided narrative. I don’t believe that anyone can argue that what’s been heard and seen about Muskegon over the last 10-20 years has been less than flattering. If someone gets shot, or a liquor store gets robbed….that’s what made the news, end of story. It became so much that a lot of people who should make the news here wouldn’t even dare because they felt that they were going to have things twisted on them and it’s a feeling that still persists all the way up the chain in some cases. If news is in Muskegon they are looking for something bad. Add in too, that what we’ve got for media here in town now, a good portion of it is farmed in from giant companies that dictate the format, content, advertisers and price for advertising. Before I left the “big companies” we were told that people had to pay to come in and talk about a benefit spaghetti dinner at a VFW hall for their grandmother if they wanted on the air. I am not sure where they are on that now, I hope it’s changed. 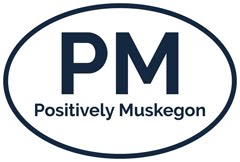 In no way are we in denial that Muskegon is imperfect. We’re imperfect too...as people and as a company. We’re imperfect at spelling and grammar, we learn as we go on a lot of things from making a live tv show happen to learning how to run cameras and edit video….we’re imperfect. Is Muskegon a “Hallmark Movie” as it was quoted in a social media post? Nope. Not for a second. But…Muskegon is a place of greatness. Muskegon is a place that stands tall and proud and has taken more than it’s fair of shots to the chops over the years and while we could very easily follow the herd and report on everything that creates fear, division and most importantly from our point of view….clicks….we’ve chosen a little slower approach to growth and revenue for a very specific reason. We want to build what’s right instead of what will make the cash register ring and get everyone to gasp at a headline and hit share as fast as they can. We always want to make sure that we’re here for any voice, “big” or “little”, to talk about what’s happening in Muskegon and why it’s important to them.

Going back to the article mentioned earlier. While we never foresaw the negative recoil around it, it was there and fair enough. We’ve always made room for 2 sides of the story when they need to be told, but we’ve also too, told them in a way that’s not a lightning rod. Not everything should be screaming, finger pointing and heels dug in. What one person sees as stunning art, someone else might be disgusted by.... we’re all wired differently, but why do we need to follow the “norm” of how things are told? With the history of the way Muskegon has been portrayed in both video and print is adding more of that kind of negative image going to help at all? Would it be better for us to show each other and the rest of the world that rational and well thought out people can discuss issues here and work toward a common goal? Can we keep proving, by our words and actions that Muskegon is truly one of West Michigan’s premiere city’s, even with the imperfections? I believe we can and you can bet that we are going to continue to work toward making that happen.

How we see and talk about ourselves is important and if all we hear and see is negativity and bad….it takes a very heavy toll on all of us. Going back a little in this writing, I spoke of the “someone got shot” news story. Well, I have spoken to media classes for years, going on 20 or so and I always open with the question “When you see something on TV about Muskegon, what is it?”  Without fail…. Hand’s go up and the answer comes back…. “Someone got killed”.  Keep in mind, I speak to 8th grade and above about media and in those years, these young people are making up their minds about what their future holds. Are we going to allow that to be the seed in their minds about where they are from? I am going to swing for the fences to change that every time I get to the plate. That’s not my home and I hope that even with all of our imperfections that you don’t see it that way either. I came here with an alcohol problem and a couch…..every miracle that’s happened in this life has stemmed directly from my time in Muskegon, and her, I will defend, and by “Muskegon” I define it as Fruitport to Montague and all parts between.

All are welcome to our pages. Differing opinions and viewpoints are fine. We thank you for your readership and viewing and more-over, thank you for watching us grow. This all started with one tiny GoPro camera and a free blog. It’s turned into a national platform with HD programming available anywhere people have online access or a Roku or Amazon Fire TV device and we have absolutely no intention of letting up on that message of “We Have a New Story to Tell”. A part of that story is our very rich history and a part of that is currently being written by a truly amazing community filled with great people who all make a difference.