Yes, even the USS Silversides is doing her patriotic duty this year in the face of all things COVID and in the thought of keeping everyone safe, just like she did when she operated in WWII, the biggest event of the year to help raise a few bucks, honor some incredible hero's and show off how good she looks in her 80's.  Yes, the Luau is virtual this year but the preservation, the history and the incredible storied history of the Silversides in Muskegon is something we all need to get behind.

It's an incredible piece of history.  One of the most lethal ships in the fleet when it comes to finishing off the enemy in World War II.  Only losing one of our own to combat in the time she served 14 patrol's and 23 confirmed sinking's, her home now in the Muskegon Channel is dedicated to the memory of those who have served in any of our wars and as the Greatest Generation continues to get closer and closer to history themselves, the Silversides remains living history to show all future generations the strength, courage and selflessness it took on the part of all Americans at a time when the world could have taken a dramatic turn for the worse. 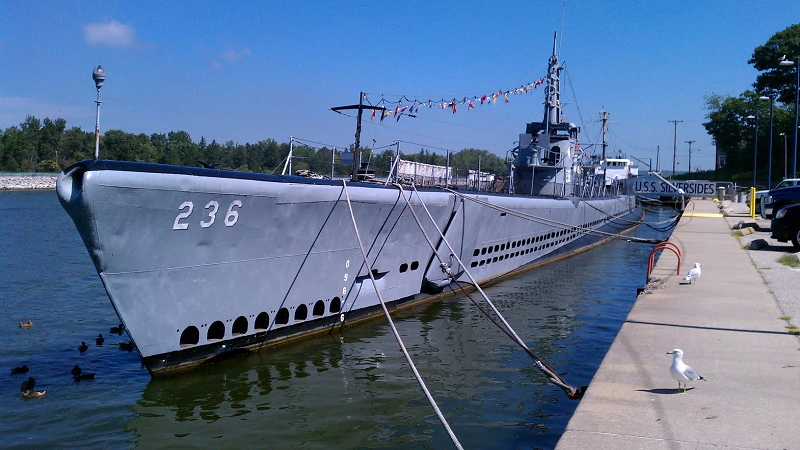 It's a functional museum as well.  It's available for walk through tours.  Groups can have a sleep over camp on board.  The accompanying museum features more maritime treasures as well as featured presentations throughout the year by incredible guests tied to history or the military and to say that the staff and volunteers of the ship are passionate about the treasure they protect, it's a huge understatement.  We know our treasures in Muskegon and we protect them with a sense of pride that cannot be matched, anywhere.

Back to the fundraiser, yes...it's a "virtual" fundraiser.  Hey, protecting Americans is what the Silversides is all about so, for one year, let's all meet up on Zoom or Facebook live and do it up!  For a pass, it's $100 bucks!  With that hundred bucks, you'll be delivered a party box.  Might have some delicious Silver Suds crafted by Pigeon Hill Brewing or if you choose some Torpedo Juice (root beer) delivered right to your door.  You'll also have the opportunity to wear your favorite Hawaiian attire and support the fun being had by all who join.  There will be some incredible people honored for their contributions to all of us, including Vietnam Vets who get a welcome home from Zaneta Adams, Director of Veterans Affairs for the State of Michigan.  There will also be awards presented in honor of Dr. Robert Garrison.. Tuskegee Airmen from Muskegon, as well as the Mark Fazakerley Award.  Find out who gets those when you tune in!  If all of that's not enough, this also commemorates V-J Day Plus 75.  Yes, when the war with Japan was finally over.

Holly Hughes is the Chair of the Board of Directors for the Silversides and Museum.  She joined us today to talk about the event and your chance to be a part of it.  There are little blips from the internet connection during the recording, so don't think it's your end of things, but the message is clear and the conversation is important, take a listen.

How bout that! How bout this? Get in on it! If you can't make the Luau, make a donation or head down for a tour.  Like any other organization, the Silversides has seen better years when it comes to financials due to everything and our support is needed more than ever.  You can be a part of the party from your home, cottage or anywhere this year.  You can get BEER dropped right off at your doorstep...how cool is that?  You can also learn something, honor some incredibly worthy people and you can finish off the night knowing that almost NOWHERE in the world could anyone pull off something like this!  The Silversides...is Muskegon and we're so proud to help get the word out about her.

And now for a real throw back.  A video "we" did before we were even "we".  This was for Summer Celebration 9 years ago to show visitors from out of town, there's More in Muskegon.