As an artist, having the opportunity to work on a scale as large as a train bridge is a world class honor.  As an artist, to be able to do that in your very own home town is almost unheard of but, in the case of Ashley Nash not only has it happened, but she was voted on by the folks of her hometown to take on such a task and bring a rusty old train bridge to life with a mix of color, black and white and a flair that this brilliant young woman beams with and it's readily apparent on her face when you see her talking about her accomplishment.

Muskegon has seen a great deal of public art expanding for a few years now.  Sides of buildings, permanent pieces of art placed in parks and near beaches, pop up sculptures along sidewalks Downtown and more.  It's an eye catching look for residents and visitors as well and as we return to our daily lives, and actually are able to get out and see some of what's gone on during the "hibernation" of the last year, it all adds into the unveiling of the evolution of us and how we are honoring the past and little by little sprucing up things for the future.  It might not be so easy to see as change like this often comes gradually and when you're here day to day, it's a blip.  But from the 1000 foot view, everything that's happening by way of beautification and investment is on par with a miracle for Muskegon and Ashley Nash has captured that in her work. 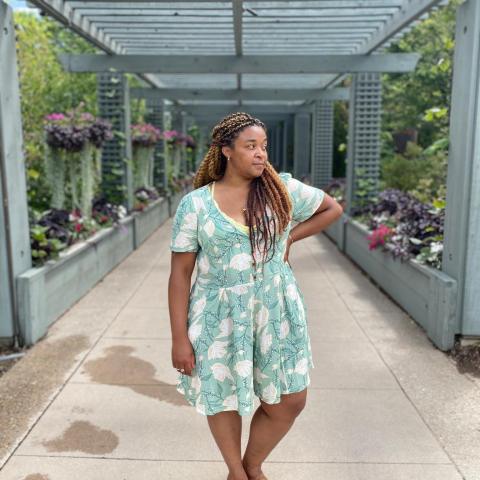 A 2011 graduate of Muskegon High School, Ashley took off for GVSU and worked on her fine arts degree and is continuing to develop as and artist and illustrator.  She was a chronic doodler in school which was her way or retaining what was being talked about while keeping her imagination as an artist alive.  This is a condition I understand all too well and as I was kind of the same in school, often seeming to not really be paying attention, it was how my mind was driven.  An artist trying to focus on minutia is tough.  Her studies complete she's hoping to work more in the field of both large scale murals like this one as well as be an illustrator for other projects.  "Why not do both" she says, and you know...she's right.  Drive and passion fuel her and to see the younger generation with this kind of push speaks volumes of the parents and community she came from.

As we sat down to talk about the work, the process of being selected to add to the beautification of our area and what it was like to be up on that lift, day after day in the blazing sun with all of Muskegon driving by, I found much more than an artist.  I found a remarkable young woman who's gifts are going to be spread all over the nation and maybe the world and one day, we'll all say "Yep...she's from Muskegon"  Take a listen.

We are so lucky to have young people like Ashley setting the bar for the next 50 years.  Bringing talent and passion to her projects as well as knowing a thing or two about home in Muskegon.  As you're driving Seaway drive and you see her handiwork, slow down a moment and admire the home grown beauty before you and take note too of the detail, care and devotion that went into her painting.  It's a major addition to our community and to have a local gal swinging the brush, we're deeply honored she took a few minutes today to talk with us about her work.  Keep your eye on Ashley Nash.  Watch HER Go!