It's an evening like no other.  It's also not everywhere you could pull it off with the pageantry and purpose behind it like we do here in town.  The Great Futures Gala for the Boys and Girls Club of the Muskegon Lakeshore is coming up on September 18th and it's an evening you won't soon forget.

Held at the home of County Commissioner Bob Scolnik, the Great Futures Gala is an event designed to raise the funding to help the young people that the Boys and Girls Club of the Muskegon Lakeshore serves.  This club is working at the local level to make a difference in the lives of our communities young people in a way that can almost not be duplicated.  Kids are embraced at an early age and finding support that may not have been there in the past for them with single parent homes, parents working extra jobs to make ends meet and some of the other challenges that are faced in society today like food insecurity and just time being alone. From their website -  " Boys & Girls Club of the Muskegon Lakeshore (BGCML) was founded in 2014 by a group of community members dedicated to addressing the need for high-quality out-of-school time programming in Muskegon County. This team, which became the founding board of directors, developed a campaign to raise the seed money necessary to open a Club. In January 2015, they hired their first team member to open the doors of the first Boys & Girls Club in Muskegon. BGCML opened these doors in Nelson Elementary School to its first 30 members on April 20th, 2015. By the end of 2015, the Club’s membership reached over 300. Within that year, the Club served over 7,000 meals and set operating hours Monday-Friday from 3:00-7:30 pm, to be open when youth needed it most."  That's a heavy lift, and it's only grown since it began. 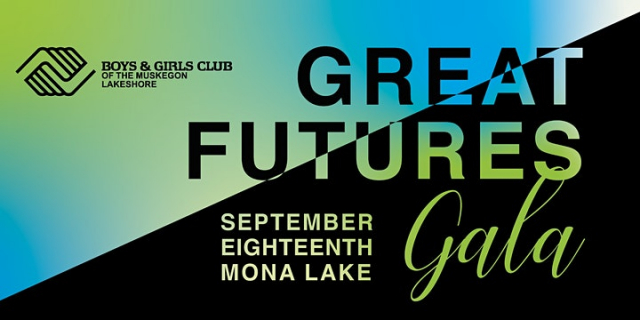 Get Tickets to the Great Futures Gala Here

Today, the Club has a new central location Downtown Muskegon in the former YMCA/MCC Fitness Center.  It's in the process of all of the renovations that need to be done to make it complete and the capital campaign for that is still going on, but the Great Futures Gala focuses on the kids themselves.  Yes, they need a place to call "home" as their club, but they also need the programming and other things provided to them to help their time invested successful.  This party is all about the young people directly served by the club and it's an investment in their, and our future.  It's a matter of showing young people that this is not only a growing community with what they see physically, but we are growing in the sense that we are seeing where we were lacking a little for a while and taking deliberate measures to course correct with programs like with the Boys and Girls Club offers.

With that, on to the party.  Outside, a magnificent tent.  Food from Harris Hospitality.  Silent auction, music, dancing, fireworks....it's a fantastic affair that will leave your head swimming and your heart filled.  Dakota Crow and Monica Turnbull are from the Boys and Girls Club of the Muskegon Lakeshore and they joined me today to discuss the event.  Take a listen.

Get set to help start some great futures.  It circles me back to the moniker that so many have adopted here in town over the last few years, "Watch Us Go".  You can "watch" on a lot of levels, buildings, housing, people and attendance at things, but there's an underlying thing too.  What you might not be able to see are the roots below.  They are being meticulously tended with the next generation or two coming up behind us and that  will see their home in a different lense.  It's a little longer growing season for some of what's changing, but it's happening, day after day.  We hope your a part of it.