Let me begin by saying this story left me FILLED with joy, hope and the belief that a step in the right direction is being taken in Muskegon in a MAJOR way.  I got an email from Michael Match at the First Congregational Church UCC in Downtown Muskegon that they  had some news to share.  He began with an apology that the news wasn't the return of what they had become known for, their Saturday community breakfast that had been going on for years, but was sidelined due to COVID, but as he went on in the email, the news he had to share was so much more powerful and engaging...to be honest, it was something I personally couldn't wait to get down to talk about.  Let me rewind you a little first.

I grew up Catholic and I am thankful for the education and direction I was given in my early life.  I would consider myself a little above average when it comes to intellect about religion and faith.  I am strong in my own, however, I would consider myself nondenominational as far as a faith goes.  I am a recovering alcoholic, I am overly sensitive to the feelings of others, I am also open to the thoughts of other in their beliefs and practices and I know enough history to know that every major world religion has had times in their past that have not been exactly boastful under the direction of the wrong people at the top.  A large part of me always heard the message of "Love thy Neighbor as thy self" and in the other ear I'd hear the hellfire and brimstone stuff about who was going to hell for whatever they were doing here on earth when they die.  There were times too when I was really young, when I'd meet with friends who practiced other denominations of Christianity who would tell me I was going to hell for not knowing enough bible verses.  What kind of confusing mess is this?  The Jesus I knew walked with lepers and Mary Magdalene was "supposedly" the town whore.  Where'd the whole idea of "judge not least ye be judged thyself" go?

Today, churches are embracing inclusion.  This means those who are thought of by some as "sinners".  Yes, believe it or not, the bible itself has been cherry picked to fit agendas.  It's happened in the past and it's happening today.  Those among us who want a place to commune, praise, seek guidance and comfort had been often met with judgement, mistrust and a general misunderstanding of their lifestyle.  Yes, the LGBTQ community often felt as if they were not allowed to participate because of who they are.  Well, the members of the First Congregational Church of Muskegon made a collective conscious decision to drop the stigma, realize that the church and even religion is an ever evolving, living and working platform and that they as a community wanted to get the word out that without hesitation, or reservation, "no matter where you are on life's journey, you are welcome."

Reverend Tim Vander Harr and I had a talk in the sanctuary today.  It's a stunningly beautiful building and the conversation is truly a welcome thought pattern, because a church....is a sanctuary, it should be a safe and inviting place for anyone no matter what and a major step has been taken by the congregation in their declaration last Sunday of being "all inclusive" and walking the walk, instead of just preaching it.  Take a listen.

It's a bold statement. It's a bold move for a church and it's a reality that more and more churches are embracing.  Some are staying with their traditional beliefs, and that's perfectly ok.  Here's the secret.  We're all creatures of some kind of faith.  Even if it's faith in the fact that the sun is coming up tomorrow morning, there's faith.  None of us are 100% sure about what the afterlife holds.  We have faith in that and we should all be working toward making heaven a reality right here on earth.  Acceptance of others for who they are and leaving judgement to a higher authority.  You can follow the First Congregational Church on FACEBOOK.  They offer their weekly services online with a YouTube Channel and if you'd like to visit the Church online, click on the image below! 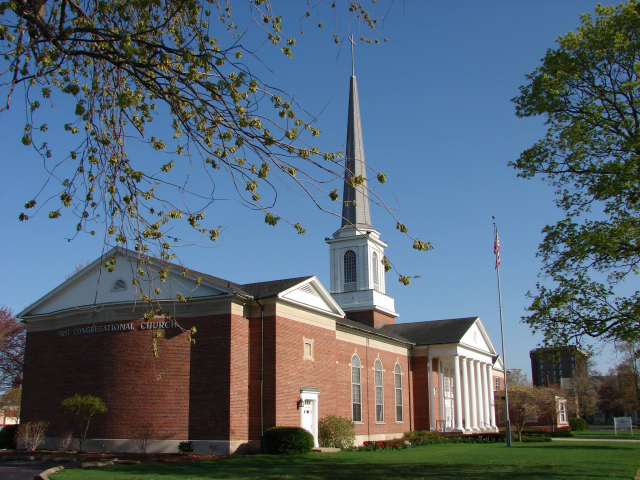