Juneteenth is now a Federally recognized holiday.  The first year the holiday was federally recognized, was only in 2021.  It took a while like most federal holiday's to catch up to what people were actually celebrating and while you might be familiar with the term, are you aware as to what the recognition and celebration is about?  I wasn't.  I had not heard anything about it much like a lot of other pieces and parts of history that were left out.  It's understandable that you might not want to talk about things in the past that were not so flattering to a person or society.....but...I have been known to come right out and say things about myself that are less than flattering about my past addiction, near suicide and failures....so to admit that I have ZERO understanding of Juneteenth...I can do that.  I can also sit right down and learn more.

Kaja Thornton-Hunter is a fairly regular guest.  We've had her on to talk about Overcoming Barriers, The US Cafe and her incredibly good Flavor Packs.  Kaja is also at the very forefront of a new vibe coming out of Muskegon Heights.  Organizing people in the community, connecting people to resources and putting people in touch with agencies and business owners that can get things done, and government agencies that may have seemed out of touch in the past....there are now "City Hall" days at The US Cafe so people can come in directly to speak to a City Manager of Chief of Police.

Juneteenth celebrations in Muskegon....they are going to be big this year.  In fact, multiple days with entertainment, activities and fun.  Jennifer Ross is the local organizer of this event that's been going on for a couple of years on a smaller scale, but with the recognized holiday and the slowing down of the pandemic it's time to take it big.  A part of the growth too, is people taking an active role.  In the past, Junteenth fireworks were people scraping up a few bucks and goin got the fireworks store.  Then came a pro display, this year....BIG!  Giving sponsors, community organizations and people as a whole all want in.  The entire party kicks off June 17th at 5:30 and concludes on the 19th at 10:30.  Amazing food, amazing neighbors and an amazing opportunity to enjoy another beautiful lakeside park in Muskegon for the day.

Where better to head than the City of Friendly People for a history lesson on African American culture and why exactly Juneteenth is celebrated.  I could have "Googled it" of course, but that's just words on a screen.  A conversation with a friend?  Now I have the chance to really learn something from a person who's understanding of the occasion and heritage leads back to the reason for the holiday.  It's got to do with an ugly piece of all of our history coming to an end....slavery, and just how long is went on after the Emancipation Proclamation was made.  Take a listen.

Imagine the feeling of freedom, after all that time? While an overly ugly chapter in history, recognizing that it happened and realizing that to be free is all anyone really wants. Free to believe how they want. Love who they want, be who they are. As Kaja mentioned in the video....we are all so much more alike than we are different. It's on all of us to just let go and realize that strength comes from unity and the idea of "us and them".......it's time drop the "and them" part....in all of our conversations.  Head down to Mona Lake Park and be a part of the celebration.  It's time. 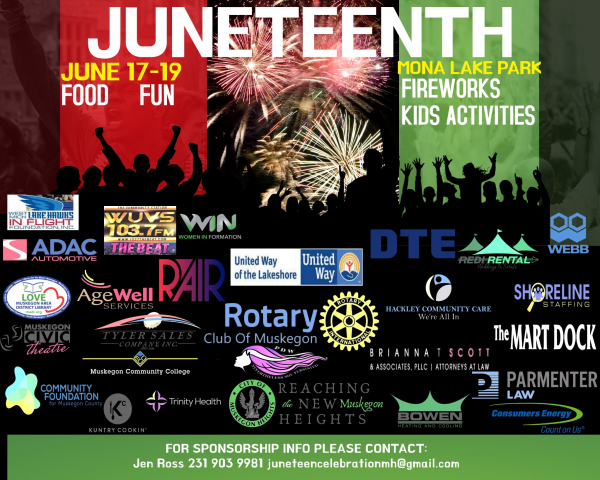