It's short notice, but getting the word out about a chance to benefit Pioneer Resources and be a part of the Autism Run on July 6th.....you need to hear about it and get there if ya can.  Any chance to help out the people that Pioneer Resources serves is a call to action as it stands, but when you involve great food, incredible items to bid on after the run, an amazing scenic ride and only $10 bucks to make it all come true!

It's being put on by the Down To Ride of Muskegon.  Not familiar?  Well, let's catch you up to speed.  Formed by a group of retired local musicians the Down to Ride has been hosting this event for 6 years.  The run has happened for 4 of those 6 and it can probably go without saying which void the 2 missing years fell into.  Well, that was that and the idea of getting together and making sure we're taking care of those who could use a little help is paramount.  Autism is a baffling condition.  Some say it makes people different, but are we not all "different" in some way?  The work that goes on at Pioneer Resources is incredible for the younger kids and the support that they have for older people on the spectrum is equally important.  Like many others, members of the Down to Ride know someone, and like many of our other rider groups in town, when they pick a cause to support....it's all in.

Registration gets underway at Pat's Roadhouse Saturday July 9th at 10:30 and the ride takes off at noon.  Along the way, you'll head out on a very nice ride which would include a chance to see my name etched in a few spots around the Wright Tavern.  Only thing is, that was  the old Wright Tavern, they rebuilt after a fire years ago and lost all that incredible Andy O history.  As the ride makes it's way back to Pat's for dinner and the after party, it's again open to anyone who'd like to come for the $10 donation.  Kids 10 and under are going to eat free too!  It's an all around feel good kinda thing and you can be a part!

Ray Broadnax is with the Down to Ride , he was able to join me quick to brag up this event, take a listen, wax the bike and make plans on Saturday for the cause!

Brrrrrap!  Saddle up and let's ride!  Hey, don't know about you but today I learned about another AWESOME group of Muskegon motorcycle riders who are doing what Muskegon motorcycle riders do best....look out for the "little guy".  I met a guy who's got the same barber and about the same amount of grey in his chin...and we both think that taking care of kids is pretty important and if that ain't enough, we managed to throw in tourism, stimulate the local economy and feed kids that are under 10 for free on Saturday.  I am not much of a braggart, but this story just saved the world!  Whew!  Caught my breath.  Get out and ride Saturday!  Details and LINK are below! 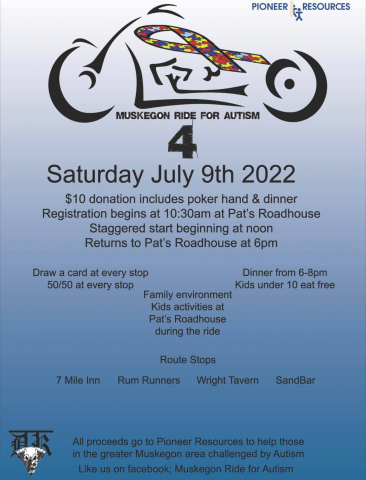