In Muskegon we're seeing a Summer exploding with more to do and more to see than ever before.  We're also seeing events on a much bigger scale than in the past and with all that we've been through inn the last couple of years, it really feels like there's been a reset.  A little more activity, a little more togetherness and a little more appreciation for what it is to have to not love out Summer like we are used to it.  It's been amazing to see such a turning of the tides.  In Muskegon too, we are remarkably lucky to be a county with so much more than the flashy stuff, we have a robust "small town" community all through the county and with Holton being about 15 minutes from Downtown, well, the end of July would be a really good time for a dose of the slowed down pace and the old fashioned feel of Holton Community Days.

July 28th-31st Holton Community Days is happening and it's a completely new event.....kinda.  Rest assured.....the notorious "Beer Fence" is still the star attraction for those who revel in the notoriety of that particular part.  Not only is that part preserved, it's being celebrated with it's own special shirt this year that is THE must have piece of apparel the Summer.  Beer Fence shirts will soon be the new way to say where you're from.  With that, the committee that had planned and pulled off the festival for years graciously found that it was time for some new ideas and motivation and in stepped the new group.  Thursday night's a steak fry for the Holton Red Devil Football Team at their beautiful stadium.  Friday kicks off the weekend and the amount of work that's going in to new games for kids, new fun for adults, seeking sponsors to provide fun for the entire family with great prizes for kids to take home is staggering.  Petting Zoo's being brought in, Disney Princess coming to Holton to meet and greet their fans, a car and bike show sponsored by CC Cycle, food trucks, burn out pits, Muskegon Axe Throwing on hand.....a special Kids Party in the Park where tickets are only 50 cents each!  That's FRIDAY!  Saturday starts at 8am and if you're not ready for a nap by 1p because there's so much to do, you're a problem.  Saturday is so busy, we'd like to refer you to the photo below for the complete schedule.  This is an ambitious undertaking and it's really got a LOT to do for everyone.  Sunday, pancakes and a community worship service.  How do you get more hometown than that?

Deanna Brant has been making the noise about this newly recharged festival.  I asked if she'd mind telling us a little more only to be met with the rest of the committee and even some pretty good friends like Candy Murat who we shoed you in action back when times were a little harder as she was doing cereal drives for the kids around the Holton Area so they didn't go hungry when the schools were closed down.  Funny, you seem to find those people all over Muskegon County who just get up and do what needs doing....let's hear from Deanna.

Time and time again, you hear me asking the same thing. Come on out and support this event. Most of them are focused in Downtown, but make no mistake, you can go back to day 1 of everything we've ever published and find us beating the drum of the importance of stuff on the outside of town just as much as what's in town.  As media has consolidated on us, it's been harder and harder to know what's going on between, for example Norton Shores and Holton.  That's a problem.  We can all do much better at welcoming friends and neighbors from across town like we do not so long ago.....it's pretty healthy actually.  SO!  With that!  Wheels north at the end of the month and if ya promise you're coming, I will have Jacks Gas Station stock right up on the famous Twin Lake Mystery Cheese that weekend so you can get a tub and I will be out on Holton Road waving as you go by to enjoy a delightful time put on by some good people who'd love to see ya.  Schedules of events are below! 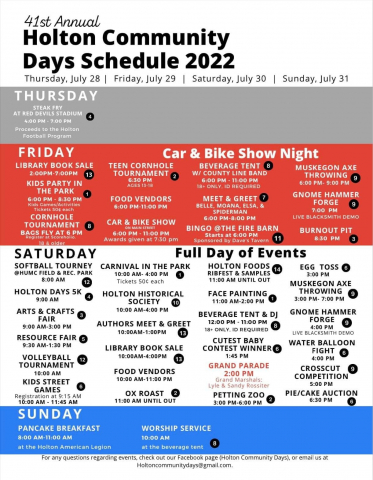 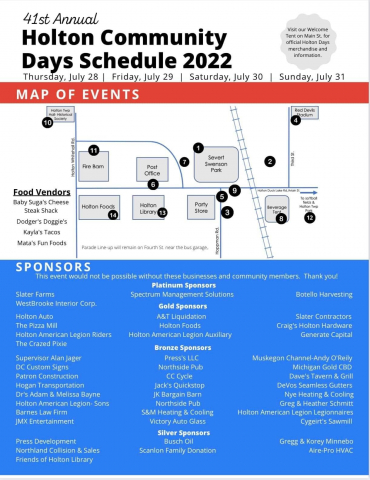