Emma Coppock fell in love immediately with the joyful colors and graphic impact of the large, bold art piece on display that evening aboard the Aquastar; the evening was a fundraiser event for Every Woman’s Place, a nonprofit with a long history in Muskegon.

The festivities included an auction of the piece, and Coppock, enjoying the atmosphere of a sunset cruise on the lake, was caught up in the bidding at the close of the evening. When no more bidders topped her latest bid and a rather lively bidding war with Ken Nowak of Nowak Machined Products of Norton Shores, she thought she had become the proud owner of a custom art piece that she was certain would be a stunning focal point for her dining room. For Coppock, it didn’t turn out quite as she thought.

It’s a happy ending, though. Rather than having obtained the piece for herself, Coppock’s bid brought the piece as a traveling exhibit to United Way of the Lakeshore for the next three months.

Coppock is the new Events Manager at United Way of the Lakeshore, and was excited to attend the event with several of the UW team. Enthusiastic about her work impacting the community, and supportive of EWP’s mission, she realized quickly what a great opportunity this ‘mistaken moment’ was to be a part of something positive for two organizations she cares about.

Auctioning the “privilege” of hosting of a traveling exhibit takes a little explaining. The idea behind creating a collaborative piece was, first of all, to offer survivors in EWP’s residential crisis center an opportunity to include art as part of their healing journey. Secondly, to make more visible to those outside its walls at least a part of that journey.

EWP takes client confidentiality seriously; integral to survivor-centered care is a commitment to protecting a survivor’s identity, ensuring their physical safety, and safeguarding their experience until—if ever—they choose to share it. Regularly, testimonials or stories from those served by EWP are shared anonymously or under changed names, for this reason.

It also speaks to the perception of domestic and sexual violence survivors as potentially ‘broken’ individuals. Abuse and assault do impact an individual, do cause trauma that then can take up residence in the body and mind, but that trauma does not define a survivor. EWP’s work is to walk with a survivor as they move forward through their experience, integrating what has happened to them, but retaining and strengthening the indelible core of their self.

The 2022 piece, thanks to Coppock, has found its first ‘home away from home’ at the United Way of the Lakeshore offices in Muskegon. Over the next twelve months, it will travel from site to site, remaining anywhere from one to three months at a location. Because one of the winning bids was an EWP staff member, the opportunity to display the piece is being coordinated with several of EWP’s community partners, including Muskegon Community College and West Michigan Works! Starting in January 2023 and the beginning of tax season, Brickley-DeLong in Grand Haven will take a turn. Finally, from April through June, the piece will go to Trinity Health.

The initial design, selected by staff at EWP in the cold, dreary days of January, featured bold close-ups of peace lily blooms, stems, and leaves. Sketched out in pencil on a three-by-three-foot canvas, the design was ready for individuals to add their touch, and over the next several months, staff, clients, and supporters added color and shape to the piece.

The piece has not yet been titled. Keeping true to the collaborative concept behind creating and sharing the piece with the community, EWP is inviting suggestions for a title for this piece through an online form at bit.ly/collaborative-art-title. The piece, upon its return “home” to EWP In July 2023, will be named… and, in its turn, become a focus of healing and inspiration to survivors and staff who enter the building. 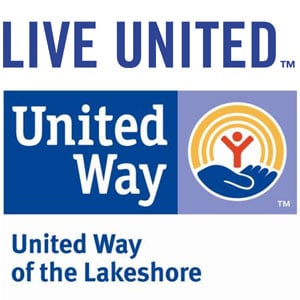