17 years strong and the event keeps growing!  Guns and Hoses is the annual benefit hockey game between area police and fire fighters, with a few corrections officers and EMT's thrown in for good mix that's put on to benefit some pretty amazing causes here locally and it's done with the care and compassion that is needed to help grow an event to the gigantic reach it's attained.

Going back to 2002 when it all got under way, the idea was sprung to raise a few bucks for charity and develop some goodwill among the community with the local police and fire fighters, because let's be honest..most of the time when we encounter a police of fire fighter, we're not exactly in the best possible predicament, so a little goodwill can't hurt.  In 2013 the event found some new direction with a leadership change and renewed energy which has solidified Muskegon Guns and Hoses into one of the marquee events in town.  Any event that can command the crowd they draw and the ability to raise over $20,000 in one day to be shared among 4 beneficiaries...that's a marquee event. 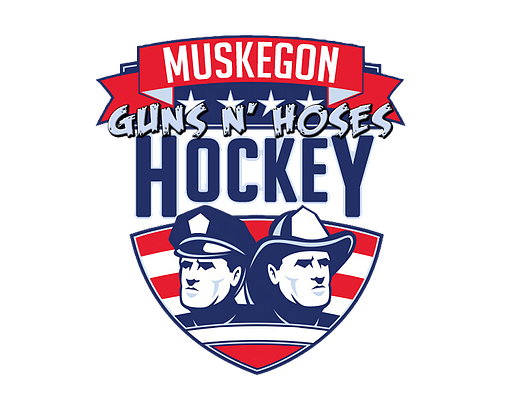 In 2018 the event will once again be out to help some pretty incredible people.  Eric Zurlaut is a baby with a heart condition, Gavin Wilcox had a benign brain tumor which caused him to be found non responsive in school, and Craig Jones is dealing with a pretty aggressive form of brain cancer.  You can read more about their stories on the Guns and Hoses Page which you'll find linked at the bottom of the page.  There will also be a portion of the proceeds going to the Old Newsies and Goodfellows of Muskegon who work yearly to help make sure no child is forgotten at Christmas.

It's an all hands on deck effort in Muskegon for this event.  From the list of people who donate time, talent or some money to this, it's really a great example of community togetherness and concentration of energy to do something good.  Conducting the whole thing are Lacey Koens and Chris Wilks and their teams of "Guns" and "Hoses" and the list of event volunteers and countless people who chase down donations, sponsorship's and generally go all in on making sure that the event is a fun way to raise a few bucks to help some really worthy people.  We sat down at Lakeshore Sports Center to talk about the event coming up April 14th, take a listen.

The purpose is so good, the people involved don't give up and the togetherness around a great time for a great cause can only be found in Muskegon.  17 years of raising money and making sure needs are met and more over, going above and beyond the call of duty by so many awesome police, fire and EMT workers to assure that people that need a hand get it.  There is a lot to be proud of in Muskegon and you'll be hard pressed to find something more to be proud of than the Guns and Hoses hockey game.  To learn more about this years beneficiaries of the organization itself, visit https://www.muskegongunsandhoses.com/ for more details.