We've shared the journey of the MARS 4004 Robotics team of Muskegon.  They are the group of kind from area schools who convene at Pribusin here in Muskegon to compete in building robots for competition in local, state, regional and world competitions called The First Competition.  Most recently, they headed to the Motor City to compete in the World Competition and they came home with the 2018 Industrial Design Award.  That's right....world wide....the award came back to Muskegon!  So much to be celebrated by these young people and advisers who help guide their career.  But the competition is only part of the year for these young people, and you might wonder what they do in their spare time after their robot has done it's thing and won it's awards.  Well, here's your chance to find out.

Michigan Kids on the Move is an organization who's mission statement reads as follows - "MI Kids On The Move's mission is to overcome obstacles to mobility in special needs children through the use of mobility aids. MI Kids On The Move's purpose is to enhance the quality of life in special needs children by providing modified toys that allow independent movement to children with limited mobility in order to promote social, physical, and cognitive growth".  It's a group founded by a mom who saw her own child having some problems with the same things other kids did day in and day out as well as fitting in wit the other kids who had "regular" circumstances as part of growing up.  It's a powerful experience to see some of these little ones getting their first taste of "normal" which you'll see in our video here in a little bit.  They also make mini wheel chairs for kids at MI Kids on the Move.

Being an upstart organization and knowing that it takes some talent to adapt your average electric toy type vehicle to work for a kid who might not otherwise be able to manage such a toy, the group reached out across the state to other robotics teams like MARS 4004 and asked if they were up to the challenge of lending a hand and the response was a resounding YES!   Today, there is an application process for a parent who wishes to have a car done up for their kid, then a fundraiser is generally held and the robotics teams take over to customize these bad boys to be adapted to the needs of the child that gets them.  Remote control operation, roll bars for safety, 5 point harness placement for the safety of the riders, the only thing missing is NOS Nitro and one of the kids dad's kept insisting he get a tank or two for his boys ride.

Kathryn Vancamp is the driving force of a mom who started all this.  As we've talked before, there is no greater force than a mom who wants to get something done for her child.  Her idea of adapting a car for her child has blossomed into something so much bigger and its connecting people who would have never met otherwise and bridging the gap between people and the unknown.  What was once a difference is now only a challenge and young minds are getting to work on how to make life better for the next generation.  If I may get right to the point....we're watching a miracle unfold right before our eyes.  Meet Kathryn and see how a miracle happens.....

I have said it time and time again.  Muskegon is a town of miracles.  I believe it and I live it.  There is no greater reward to me than to be a part of something so incredibly special and to watch a moment of life transformation like I saw at Pribusen with the MARS 4004 team.  I'd like to add too, that meeting Kathryn was a special treat because the greatest hero's to me are the ones that stumble into it and change the world because they saw something that needed to be fixed.  If you'd like to know more about MI Kids on the Move, you can visit their website by clicking below.  If you have a heart...and I know you do....you might even consider making a donation to the efforts so more of this kind of thing can go on.  This how the world changes. 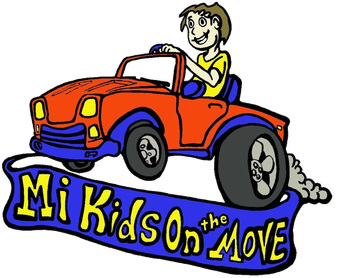