The Andrews Sisters made the song famous and the entire country was dancing to the beat of the "Boogie Woogie Bugle Boy of Company B" way back when.  It was an inspirational war time song deigned to keep spirits up and help the USA trudge through some pretty tough times.  Recorded on January 2nd 1941 the attack on Pearl Harbor was almost a year away and D-Day wouldn't come until 1944 but the national mindset was already thinking that there probably wasn't much of a way around what was to come.  WWII would divide the world and define the "Greatest Generation".  Every part of history has had some pretty incredible moments where we've been tested and through those tests we've defined ourselves, and we've had some that have stood out.

While not the original "Boogie Woogie Bugle Boy" Muskegon's connection to the legend was a man named Clarence Zylman.  Clarence Zylman served his country as a bugler, playing reveille in his own boogie-woogie style. He became a military legend as the bugler who got the troops up with a jitterbug in their step. He was an ordinary man who led a remarkable life, and, thanks to an extraordinary song, will forever be known as Muskegon’s Own Boogie Woogie Bugle Boy.  Born in Muskegon and trained on the streets of Chicago, he toured the country as a professional trumpeter helping to lead a musical revolution, featuring a new boogie-woogie sound.  He joined the Army in his 40's and took on the famed role.

November 10th, 2018, near the LST 393 Veterans Museum, a public event will be held to dedicate a life-size bronze sculpture of Clarence Zylman. Installed prominently along Lakeshore Drive, Zylman faces east towards the rising sun, forever playing reveille to wake Muskegon. But the story gets even more local.  The sculptor is a Reeths-Puffer grad! 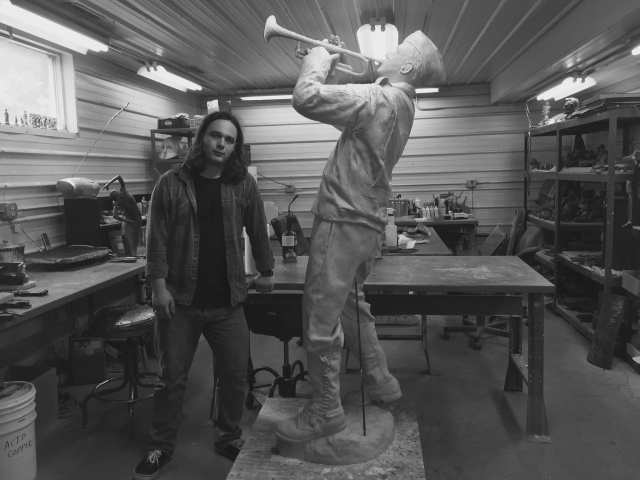 Meet Ari Norris!  The son of a local teacher and avid fan of history and art, Ari took the path less traveled and took off for a sculptors apprenticeship for years to learn his art.  Meticulous work, dedication to perfection and the honoring of centuries of the craft Ari is now beginning to have his work placed around the country.  Recently, his bronze dedication to Doris Rucks at Muskegon Community College was unveiled and as you can probably guess, November 10th Ari's work will be celebrated once again Downtown Muskegon by the LST 393 when the Boogie Woogie Bugle Boy is dedicated.

I caught up with Ari at Muskegon Community College near the Doris Rucks piece to talk about his life path and career decisions.  What it takes to become a sculptor and how it feels to have such important work pop up around his home town.  Take a listen.

Remarkable to see a local guy take off on a road less traveled and willing to make a dream become a reality.  The blending of art and passion is never an easy thing and the effort and determination it takes to enter a world like Ari has...that takes some guts.  We have much to celebrate in this young man and as his career unfolds on a world stage, maybe someday it will be the artist himself we're celebrating here in town with an unveiling.  We can only hope.  Thanks to Ari for a few minutes and if you'd like to visit his website it's at https://www.arinorris.us/ .