We've enjoyed covering the work that goes on by the M.A.R.S. 4004 Robotics team in Muskeogn for a while now.  They are a group of students from multiple area schools and their advisors who come together to compete in the FIRST robotics competitions that are held all over the country.  They are intensive projects that focus on science, technology, math and team work.  They meet up and work out of the back of local business Pribusin.  Pribusin manufactures quality process controls and instrumentation not far from the Our Lady of Grace Church.  They employ a shop cat to keep an eye out for the occasional mouse.  The family dog is also a regular on the premises as you'll see in our chat here in a little bit.  It's a humble place is what I am getting at, but the truly amazing things that are coming out of it will blow your mind.  More over, the amazingly intelligent young people who are working on the FIRST Robotics projects will make your jaw drop.

When we last visited, they were just past their World Finals appearance back in April in Detroit.  The group was putting their skills to practical use outfitting motorized toy cars for kids with mobility issues.  Yes, "geeks" have heart.  It was a great story where families who never thought their kids would do what "normal" kids do, but the MARS Team made it happen.  There were not many dry eyes when the technology made the kids smile and laugh as the cars zoomed all over the floor at Pribusin.

Well, technology marches on as do the FIRST Robotics teams.  That was last year and this year, their project is called "Destination Deep Space" inspired but the 50th anniversary of the moon landing.  The teams have the title but not the specifics on what needs to be designed just yet and they also have something that will peak the interest of the Muskegon.  They have a destination "West Coast" where the regional teams will converge on Muskegon for the competition at Orchard View High School.  March 14th-16 the eyes of the tech world will be on OV as the competition gets underway with these brilliant young people.  L3 is the first to jump up and want a role in this, truth be told...they are keeping an eye on the competitors as a recruiting tool.  Good for these kids.

Now it's up to us!  Let's roll out the red carpet.  We're going to have hundreds, maybe even thousands of people in town.  They will be here to brag up their kids.  Boast about their schools.  Take in some of the great dining opportunities, fill the hotels, see the sites and enjoy Spring in Muskegon as nature reflects what we're seeing in the changes of our town.  We're busting at the seams in everything from how we're perceived to the young people we're putting out with smarts...drive and no question in their mind that they can do it.

I got out to the shop to get the details.  I met up with Michael Gerstweiler who is one of the groups advisers along with team members Andrew Uriarte and Harrison McIntyre to talk about the event.  There is a need for some people to help out when it's going on.  They are also interested in hearing from area business and people who might want a sponsorship role.  This is a BIG deal to welcome to Muskegon and something we all need to rally around.  Take a listen to what this program does for our students and out area.

We're ready to rock!!  Deep Space here we come and welcome to Muskegon!  For every story you hear on the news about some kid doing some dimwit thing at school, trust me when I tell you that there are 10 kids doing something great.  So great in fact that they go out and impress the world enough to bring their competition right back home to their own field!  We're going to build toward March with the MARS Rovers and our other area teams who compete in FIRST Robtics.  The countdown is on and we're excited to follow the action leading up to launch at Orchard View on March 14th!!  To be a part of the action, click on the image below to visit their site. 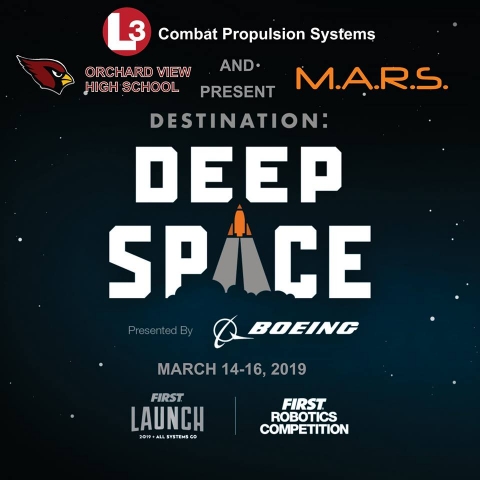