Ok, I am going to start right off with some honesty.  I got a message from Brooks Wheeler who owns and operates Muskegon Monument and Stone on Pine Street across from Evergreen Cemetery after we ran the story on The City of the Dead historical event coming up.  I thought.... "Great...a tour of a bunch of computer programmed cutters, a topic people hate...death....and a place they would rather not have to spend a dime, this will be fun."  Yes, even the most positive of us grumble sometimes....but I am here to tell you....what I walked into was breathtaking to say the very least.  I mean truly jaw dropping history of who we are and how things have been done for over 100 years in Muskegon and everything included from the paperwork to the tools it took to do it.  I walked into a living working time capsule and I was just floored at every turn.

Let's start off with Brooks.  An unassuming cat.  An artisan of the highest order who still does all of his engraving by hand on every stone, minus a little sand blasting.  He painstakingly hand draws ever single carving on the monuments and has hundreds and hundreds of sheets of his work he's done.  If it was something someone loved in life, from NASCAR to the outdoors to their favorite tattoo....Brooks has turned it into a forever engraving.  He's kind, he deals with people who come to him in the hardest times of their lives and, there are those too who come to him well in advance of the inevitable and plan something cool to mark there spot in the forever after.  He's figured out how to handle the emotional state of just about anyone, at any time and that's got to be an essential part of his success. 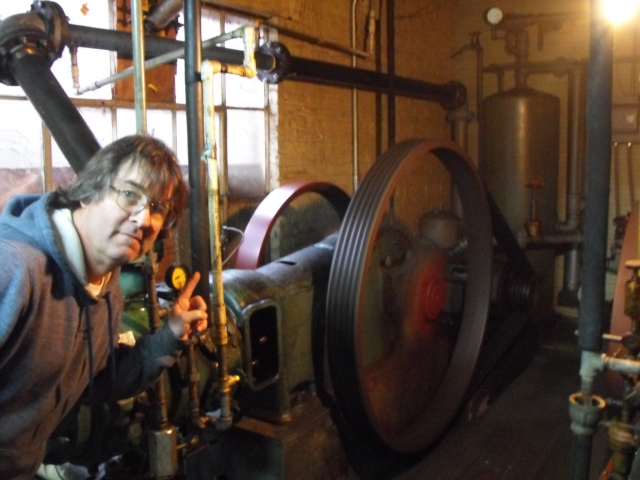 Now, on to the business and building.  Living.  Working.  History.  I have had the good fortune to be in the catacombs of more than one place here in town.  I mean some deep spots where who we are and what we are about is held.  I have also been given the privilege of talking to some of the keepers of our history and of all that, you would be remarkably hard pressed to find a spot in town that has more than Muskegon Monument and Stone.  Every hand written record of their sales back to 1901.  Machinery that still thrives and functions that has been there since the beginning or nearly the beginning and if it has been retired, it's tucked away upstairs or in the back.  Old hand tools, the stove they use to heat the place is #25 in production from the Kalamazoo Stove Company which has been extinct since 1952, and only opened a year after Muskegon Monument and Stone.  The air compressor they use I believe he said is from the 30's and it's still chugging along as solid as a rock.  The floor boards creek....the safe is unbreakable and has an internal surprise in case anyone does try and the over all feeling of nostalgia is overwhelming.  A walk through the unseen at Muskegon Monument and Stone is as exciting as a museum tour anywhere and you'll get an exclusive look in the video below.

I don't recall ever meeting Brooks in the past, but we do share some pretty cool mutual friends, so we could have bumped into each other somewhere in the past.  Probably a race track.  His daughter is quite a popular National Anthem singer which he's quick to boast about as anyone would be.  Take a listen to our chat and enjoy the tour.  This is one of the most fun things I have ever been able to see.

For every time I am standing there shaking my head thinking that what I do and why is hard work.... and how much easier it would be to just go find some job and punch a clock....along comes a guy like Brooks and says.... "Hey, come see this!"  Don't get me wrong... a flood of advertisers wouldn't get turned away, but what a gift it is to be Muskegon's story teller!  Who else gets invited in to see the un-seeable and given the all access pass to the people and places who make us who we are?  Brooks, thanks man!  What a great day!  If you'd like to know more about Muskegon Monument and Stone, click below to visit their website.