Muskegon has a long and storied history of hockey.

There were great teams, great coaches and great players. And, one of those names known as being synonymous with Muskegon hockey is Moose Lallo.

Lallo spent five seasons in Muskegon as player, including holding the role of player/head coach. He retired as a player in 1965 and remained with the franchise as head coach until 1978. He served later as the team’s general manager.

On Tuesday, Morris “Moose” Lallo died in Florida at the age of 95. He would have turned 96 later this month.

“He was tough and he didn’t want to go,” said Jerry Lallo, Moose’s son who moved to Florida 4 years ago to care for his father. “He was quite a fighter. There was just no quit in dad. He was even driving until he was 93.”

Lallo, a defenseman who played with plenty of grit, began his hockey career in 1944 with the Boston Olympics of the Eastern Hockey League. After stints in San Diego, Moncton, New Haven, Grand Rapids (International Hockey League), Huntington, Washington and Philadelphia, Lallo landed in Muskegon in 1960.

In each of those stops, Lallo developed a reputation as a hard-nosed defenseman who did not hesitate to engage in the rough stuff from time to time.

“He had a lot of love and passion for the game,” said Terry Ficorelli, who was a young and upcoming broadcaster in the latter stages of Lallo’s time in Muskegon. “He was tough player, just a hard-nosed tough player. He was an old school guy and if you ever looked up ‘old school hockey’ you would probably see his picture.”

That passion carried over onto the ice and it was the fans in Boston in the 1940s that dubbed him as Moose for the way he pushed the puck up the ice. From there, the nickname stuck and lasted throughout the remainder of his life. Despite the nickname and his style play, Lallo considered himself and rough and tough hockey player, but never dirty.

“Young players always wanted to challenge me because of my reputation,” Lallo was quoted as saying in the book Muskegon’s Hockey History and Heroes, written by local author Jay VandeVoorde. “I never wore shoulder pads and that helped me develop a good hip check, which I liked to use. The uniforms were wet, heavy and smelly. Few players wore a helmet.” 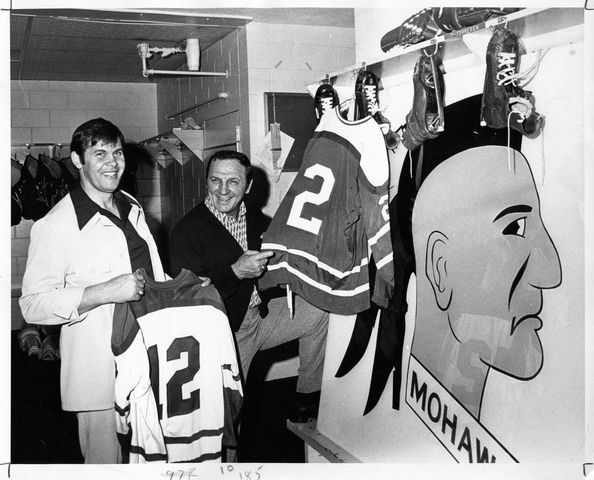 Many times, Lallo sent opposing players tumbling to the ice or into the boards with his thunderous hip checks.

Lallo, along with former owner and general manager Jerry Delise were instrumental in bringing hockey to Muskegon with that very first team, known as the Zephyrs.

From there, the Zephyrs developed a solid relationship with the Port City fans and that included Lallo, a very popular player because of his skill and grit.

“The fans were always great and always supportive,” Lallo told VandeVoorde. “Fans in other arenas hated my guts. I’d get booed, yelled at, and got in fights near the stands. When I coached my last game in Port Huron, the fans passed hat for a collection for me.”

The stories of Lallo and his love and dedication to not only the game of hockey, but hockey in Muskegon go on and on. His players respected him, the fans loved him and that made for a long and successful career both as a player and coach.

“We were playing in Saginaw in the playoffs and decided to stay in Flint instead of Saginaw,” Gary Ford was quoted in Muskegon’s Hockey Heroes and history. “Anyway, Ernie Moser, who played for Flint for a number of years and I were eating lunch and one of his friends who happened to be on the police force came up to us. Well, we talked him into having Moose Lallo arrested before we left town. The next day, we got on the bus and this guy shows up with another big cop and came on the bus with a warrant for Moose’s arrest. They have the warrant to Moose and he was told he was under arrest. Moose got hot, frustrated and started to ask questions.

“He didn’t read the whole warrant because it said he was under arrest for ‘impersonating a hockey coach.’ Moose turned to the driver and told him to make sure we all got fed and get us to the game. He was already to go with them and then he turned around and saw all the players starting to crack up behind him on the bus. He finally realized that somebody got him real good.”

His players echoed their appreciation to Moose for his coaching style and his fairness.

“I thoroughly enjoyed playing for Moose,” said Steve Miskiewicz in an interview with VandeVoorde. “He always gave the American players a fair chance if they helped the team. American players were just starting to break in.”

That successful run as a coach in Muskegon led to three Turner Cup championships as the IHL’s playoff champion, seven Huber Trophy titles as the best team in the regular season. He also served as a general manager for a number of years in Muskegon.

He was the league’s first-team all-star coach five times and a second-teamer on two other occasions.

After leaving Muskegon, Lallo traveled south to Fort Wayne where he coached two seasons for the Komets. His coaching career also included the Baltimore Skipjacks and the Troy Sabres before retiring for good in 1985.

The accolades did not end following retirement. His No. 2 jersey was retired by the Muskegon hockey club in recognition of his contributions to the game of hockey here. In 1993, he was inducted into the Muskegon Area Sports Hall of Fame.

“Hockey really was his life,” said Ficorelli. “When Jerry Delise was forced to sell the team by The Chronicle and the community, it was Moose who put together the group that bought the team. Moose put together that group to keep hockey alive in Muskegon. He was always very positive about hockey in Muskegon.”

Lallo lived in Pompano Beach, Fla. where he resided for nearly 20 years.

Our Many thanks to Ron Rop for the guest contribution.