We are leading the charge once again in Muskegon when it comes to getting back to what we know, love and dedicate our time, treasure and talent to.  It's a good thing.  It's a great thing because while none of our favorite events really "stopped" last year, most were paused and some had to go the virtual route to continue to benefit the causes they support.  One thing is for sure, everything was different including Stand Up for the Cure.

Stand Up for the Cure is actually a national event that picks areas that have enough water to support such an endeavor.  It's all about breast cancer and the "Sea of Pink" which is found out on a stand up paddle board or 100 of them or so any given event day.  Seasoned pro or fist timer, the paddle boards are there to help people try out what could be a very fun and healthy lifestyle activity and of course, the awareness, detection and prevention of breast cancer is paramount under all the music, food and fun at any one of these events. 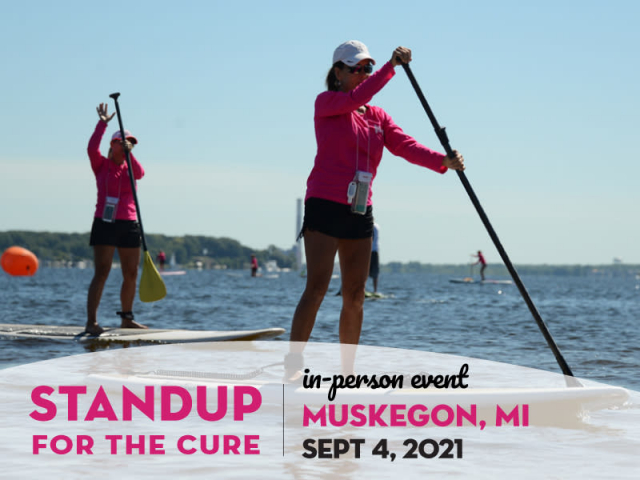 Register Here For Stand Up for the Cure in Muskegon

Locally, Stand Up for the Cure began on Muskegon Lake and as it grew, it was pretty clear to see that the area was just a little too cramped when it came to the attendance, which when your fighting breast cancer and you have a growing event, isn't necessarily a bad problem to have.  It didn't take a whole lot of head scratching to figure out that a move over to the beautiful shores of Mona Lake made perfect sense and that to grow and flourish, it was time to move.  A year or two at Ross Park and along came COVID and, as we talked early on here, everything went virtual.  Yes, those who believe and fight still did their part individually, checks were presented and the event survived.  But, if you've ever been a part of any kind of survivors endeavor, the main thing that was missing is the connection.  It's a powerful one too.  Even if unspoken, the connection between the people and the families of those who have survived a bout with cancer is amazing.  So too is the bond between those who have survived and those who have had other who didn't.  There is HUGE power in groups who can understand the circumstance from a personal connection compared to those who have not been directly touched.

Around the country, Muskegon is the only area that's coming back with an in person even this year.  Other beautiful beach towns are still holding virtual events to support the cause, but...and this is where we really get the chance to shine....ever single one of us in Muskegon are simply incredible at improvising, adapting and overcoming.  Where other towns might struggle to scramble up some to organize and put on an event like this, all through the pandemic we've been flexing our muscles on getting the important stuff done, like feeding those without, helping people with information and treatment and more.  We did all that in the middle of misery, for us to put on a triumphant event to help inform, protect and defend those who fight breast cancer, we got that all week and twice on any given Sunday.

I met up with Shawn Stephenson and Shawn Norden at Ross Park to talk about this years event.  We wanted to get the word out in advance because if you participate, there's a t-shirt involved and to get you registered by July 31st will assure that you get the right size.  Registration will be open past that date, but if you like to show your support year round, and want the shirt that fits....hop to it.  Take a listen to our chat with these two AMAZING survivors and let's get ready to once again Stand Up for the Cure in Muskegon.

What are we best at? Circling the wagons and taking care of our own.  It will be a slightly scaled back experience this year but the importance of protecting our women from breast cancer is paramount, least we forget, men can be afflicted too.  Ross Park is a beautiful and serene setting for such an incredible even to take place and for us to be the leader in bringing back an event of this magnitude and importance first in the nation, it' doesn't surprise me one bit that it's happening in the Muskegon area at Ross Park in Norton Shores.  This is the exact kind of thing we fight for and the exact kind of reason we fight.  We'll see you September 4th for Stand Up for the Cure.